Shaved-ice in over 40 homemade flavors. 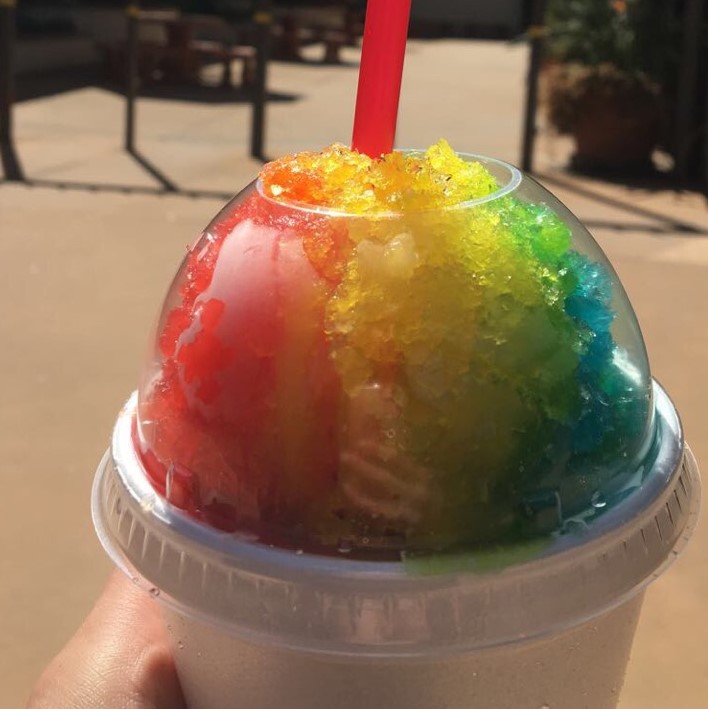 “We Bring The Party To You”.  That is the tagline for Paradise Shaved Ice and the business philosophy of its owner Angela Rayher; but once you meet her, you discover that she's the Party!

To engage Angela is to have yourself disavowed of the notion that people from the South are slow-paced, soft-spoken and generally laid back; she is not any of those.  Sheis a bundle of energy that moves and talks at a California pace.

Born and raised in Louisiana, Angela had a long career in sales, then moved to the Cayman Islands and became a Flight Attendant for Cayman Airways. Upon moving to California, she had a very successful run as a Celebrity Impersonator.  She brings the people skills, creativity and imagination of those professions to her business.

NewOrleans is the world capital of Snowball Stands.  Angela grew up there standing in line during the hot and humid Louisiana summers waiting to buy her favorite Snowball flavor. (FYI, Southerners will tell you that a Snowball is “not a snow cone”. The ice is shaven, not crushed.)

Angela may have left her Southern roots, but not the memory of those cool, flavorful, and satisfying creations she knew as a kid.  Although she and her family have lived on Central Coast since 1994, it wasn’t until 2014that Paradise Shaved Ice was born.

Angela’s creations are by far, the best in SLO County. Primarily because her concentrates, which are shipped in from Bayou Country, are created here locally with pure cane non-GMO sugar and made fresh daily! None of her products have hi-fructose corn syrup and the fruit flavors are made with real fruit extract. And in keeping with people’s allergies and sensitivities, she makes several flavors that are sugar-free (made with Truvia all-natural sweetener) and dye-free options.

Angela created the idea of putting alcohol in the shaved ice for “grown-up” parties. Think, Margaritas, pina coladas, strawberry daiquiris, vodka/pink lemonade to name just a few. What a unique idea! And brides and wedding coordinators these days are looking for ways to make their weddings more unique.  Paradise’s party price is very reasonable starting at $200 for up to 50 people.

She and her two ‘business’ partners, ‘Big Bertha’ and ‘Little Bertha’ (tropically themed wrapped food trucks) run from San Miguel to Santa Maria bringing their sweet treats to birthdays, weddings, bachelor/ette parties, graduations, (and has even served at a funeral). They also love doing fundraisers for schools, groups, etc.

If you want to add something special to your event, a fun and flavorful treat that will have your guests smiling, you can contact Angela at:

"Love Angela and Leah! Great team, great service, reasonable price and lots of fun! Did a wonderful job for a kids birthday party, kind and easy to work with!"

"Yum! The Sno cones and treats are amazing and so many flavors! We love seeing Paradise st all the local events and she also caters for parties! Great product, great service, and at a great price! Can't beat that!"

"We just used paradise at a party for 200+ people and they were out of this world! Angela is so genuine makes her own syrups, tons of unique and delicious flavors with less preservatives."

"Oh my gosh! So happy to have found this little gem! Super yummy Sno cones with tons of different flavors. The owner makes all the syrups herself and they are fabulous. I had pink grapefruit - delicious, my daughter had raspberry and tutti frutti, my son had orange and root beer and my friend's daughter had tiger's blood with raspberry."

Please get in touch with us to let us know how you'd like to communicate. Just type your message and we'll receive an email from you.

There was a problem, please try again later.
Thank you for sending your message.